An Interview With: Al Quint

Al Quint is a walking encyclopedia – his knowledge of punk is unmatched. He can tell you who did what on this album, who appeared on this bill, track listings, stories from shows, names, places, you get the idea. It’s incredible.

Suburban Voice is the physical and digital form of this knowledge. Originally a print zine from the 80s, it’s now a blog that he still runs and writes for frequently. He covers everything from music reviews to show reviews, interviews, politics, and often posts pictures from the shows he still attends. When he’s not writing for the blog, he’s hosting his radio show, Sonic Overload. Al Quint does it all.

I’ve been a fan of Al’s work for about two years now, after a buddy of mine told me 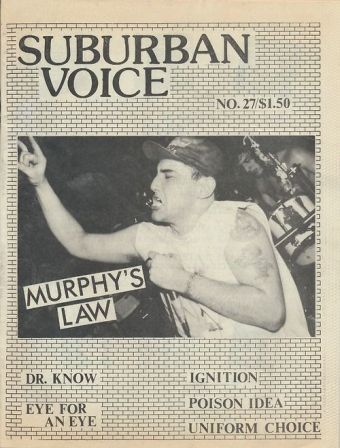 about Suburban Voice and the blog. The blog has turned me onto so many different bands that I’ve come to love, and I love reading what he has to say about it.  So when I reached out to Al to set up an interview while I was in Boston, I was super excited when he agreed to meet up. He suggested a vegan/vegetarian Chinese place in Allston called Grasshopper (which is really fucking good by the way). He told me about starting Suburban Voice, his most memorable interviews (including the biggest assholes he’d ever interviewed), stories of people riding bikes while in the pit, and more. Listen below to hear all these stories and more: